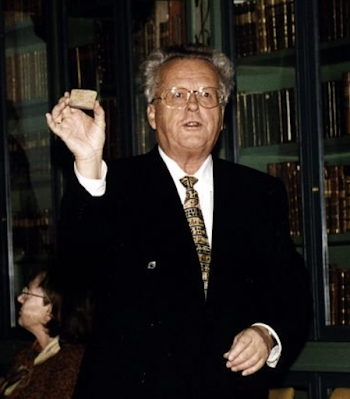 Weekly Norwegian newspaper Morgenbladet has reported that members of the Norwegian Economic Crimes Unit, working in coordination with the Økokrim police, confiscated approximately 100 antiquities from the extensive collection of Martin Schøyen which Iraqi authorities believe were illicitly removed from their country.
This seizure comes following a request for assistance by the Republic of Iraq in October 2019 asking both the Ministry of Culture and the Økokrim authorities for assistance regarding 762 artefacts, including 654 incantation bowls with inscriptions written in Jewish Aramaic, the language of late antique Mesopotamia’s Jews, known to be part of the Martin Schøyen collection and which were purportedly exported from Jordan in 1988.
Among other artefacts, Schøyen's manuscripts collection in Oslo, which also warrants attention, has been reported to consist of "7597 items, of which 1052 papyri and ostraka from Ptolemaic to Arabic age"  as well as hundreds of controversial cuneiform tablets from Iraq which were in circulation in London during the 1990s.
Many of the objects in the Schøyen collection were purchased through the now-deceased Jordanian dealer Ghassan Tamim Al-Rihani.  Commenting on why not all of the 762 contested artefacts objects were confiscated,  Maria Bache Dahl, acting public prosecutor at Økokrim stated:

"We have information that indicates that a number of the wanted objects are outside Norway." 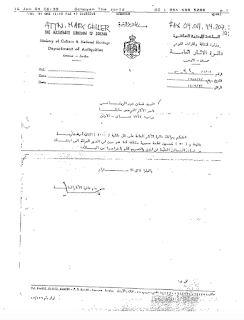 In the past, suspect Iraqi objects in circulation in the ancient art market attributed to sales conducted by the Al Rihani family frequently made their way into the Martin Schøyen collection.  These objects were purportedly all exported from Jordan to the United Kingdom on the basis of a single Jordanian export license, dated 19 September 1988.  Research conducted by some provenance researchers believe this document to possibly be inauthentic.
Even if the export document is legitimate, as has been attested, even by some Jordanian authorities, it only serves to authorize the export of material from Jordan.  The 1988 document does not serve as the original legal authority for the licit export of material originating in other countries, including Iraq.  It should be noted that other artefacts, purportedly as vaguely attributed to this invoice, also ended up with the Green Collection and the family's sponsored Museum of the Bible in Washington DC.  These were also subject of restitution claims by the Republic of Iraq in the United States. 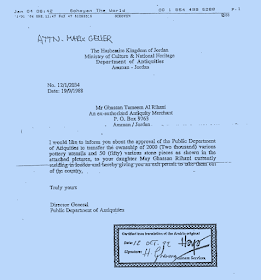 A certified translation of the Jordanian export document, made by an obscure copy shop and dated 12 October 1992, four years after the Arabic document was issued states as follows:

I would like to inform you about the approval of the Public Department of Antiquities to transfer the ownership of 2000 (Two thousand) various pottery utensils and 50 (fifty) various stone pieces as shown in the attached pictures, to your daughter May Ghassan Rihani currently residing in London and hereby giving you an exit permit to take them out of the country.
Truly Yours
Director General
Public Department of Antiquities.

In a previous UK inquiry, when questioned about the legitimacy of a grouping of his incantation bowls loaned to UCL in London, Schøyen noted that he had not kept any of the importation papers or a series of poor quality photos associated with his sales purchase.  This “plausible denial” is a technique ARCA frequently records with regularity among dealers and or collectors of ancient art without substantiative legitimate provenance.  The individual in question affirms that they had the documentation or they saw the documentation at one time in the past, but in the subsequent years, said documents, were they to be export licenses, bills of sale, ownership letters or shipping documents failed to be retained with the object in question.

In the transcript of an Al Jazeera documentary,  Iraqi authorities, via a confidential informant, believe Al Rihani received Iraqi artefacts smuggled out of North Iraq sometime around 1991, shipped through intermediaries from Amman Airport to Al Rihani in London.

Due to the broad wording of the original 1988 invoice, Ghassan Al Rihani may have simply reused the export document repeatedly, to substantiate additional illicit material in circulation in London and elsewhere.  Hundreds of artefacts that passed through this family's hands were then purchased by Martin Schøyen directly, some of which have been sold onward and were not retained by Schøyen in the long term.

For those that want to learn more about the controversies of this collection, I suggest reading scholars Christopher Prescott and Josephine Munch Rasmussen 2020 article ‘Exploring the “Cozy Cabal of Academics, Dealers and Collectors.”  Another excellent reference is the Biography of P.Oxy. 15.1780 by Roberta Mazza of the University of Manchester from Volume 52 of the Bulletin of the American Society of Papyrologists.