How many bags of cocaine could a Monet buy? 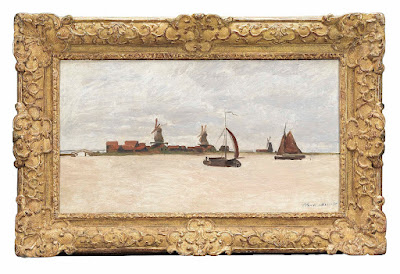 Back this summer shots were fired by one of two suspects fleeing the scene of an attempted theft of Claude Monet's painting De Voorzaan en de Westerhem at the Zaans Museum in the Netherlands.   Yesterday, in an unexpected turn of events, one of the two suspects turned himself over to the Noord-Holland police.
More surprising still, this suspect, listed as Henk B in Dutch news services, appears to be Henk Bieslijn, the Dutch national who was previously sentenced on 26 July 2004 to four years in jail, along with his coconspirator Octave Durham, for their roles in an earlier museum burglary which nabbed Vincent Van Gogh's Congregation Leaving the Reformed Church in Nuenen and View of the Sea at Scheveningen.
While both culprits were convicted and served out their prison sentences, the two Van Gogh's, stolen from the Van Gogh Museum on 7 December  2002 remained in the hands of the Italian underworld.  Both paintings were eventually recovered in 2016 in Castellammare di Stabia, in the Bay of Naples, where they had been stored by their purchaser, Raffaele Imperiale.  Imperiale is the Camorra affiliated crime boss of the international drug trafficking Amato-Pagano clan who was arrested in August in Dubai and is awaiting extradition.
Imperiale is alleged to have given up the Van Gogh paintings to the Italian authorities in exchange for a lower prison sentence.  Given Henk B's connections to organised crime, it seems reasonable to speculate that had this attempted theft of the Monet been successful, the French artist's painting too would likely have been brokered to members of the underworld.
For now, it remains to be seen what Henk Bieslijn knows, what his motives were and if he will cooperate with the Dutch police.
at Wednesday, September 22, 2021
Share