Three convictions and one acquittal, the number of museum thefts Nils Menara, AKA Nils M., has been charged with. 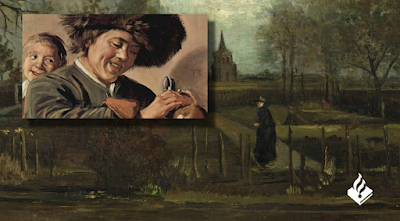 Nils Menara, AKA Nils M., has been sentenced to 8 years in prison by the Lelystad court in the Netherlands for the theft of two artworks:

Neither painting has been recovered.

Menara was also convicted for possession of a firearm and a large amount of hard drugs and was described by the court as an "incorrigible, calculating criminal".  In making their case, prosecutors had noted Menara's DNA presence at both crime scenes, and one the basis that the modus operandi from both thefts, as well as others in the past.

The fact that Menara was tripped up by his own DNA is either ironic or just plain stupid, given that in 2009 Dutch police tracked the thief and an accomplice through DNA traces left on a crowbar and bolt cutters, at the scene of a 2009 museum burglary at the Stadsmuseum IJsselstein in the Netherlands.  There, burglars stole six landscape paintings from the 17th and 19th centuries, including works by Jan van Goyen and Willem Roelofs.  In that case Menara was acquitted.  Despite the DNA traces, the judge cited that this evidence alone was insufficient because the tools could also have been touched elsewhere.

Perhaps emboldened by shaking the charges relating to the Stadsmuseum IJsselstein, three years later in 2012 Menara violently entered the Gouda museum using semtex explosives blasting violently through the museum's front door.   In less than five minutes, he made off with a gilded silver monstrance created in 1662 by Johannes Boogeart which had been on loan to the museum from the parish of St. Anthony of Padua, fleeing the scene on a motorbike.  Adding insult to injury, debris from the explosion pierced a painting by Ferdinand Bol and another work of art.

This time though, Menara's luck didn't hold.  A short while after, Dutch Police tied him to the blowing up an atm with explosives, which helped them in obtaining a warrant to tap his phone, which gave the police the much-needed evidence which tied him directly to the Gouda Museum burglary.

In June 2013 the investigation department of the Central Netherlands police, working on the Eiffel investigation into a series of explosions and ram raids at jewellers caught suspects Nils Menara and Erik P., on tape relating to two criminal events, one of which was a conversation about explosives and the other the 2012 Gouda museum theft.  The pair also talked about the Schiphol Airport diamond robbery in 2005, to the great frustration of the police and judicial authorities as the suspects had been previously arrested for this, but then released due to lack of evidence.

Upon his arrest for the Gouda Museum burglary, Menara was found to have heavy weapons, ammunition, money and drugs in his house.

Thankfully, this time, his charges stick and on 5 February 2016 Menara was sentenced by the court in Utrecht to six years in prison for the robbery at the Gouda museum, two years less than the sentence requested by the Public Prosecution Service.

In January 2017 seven more suspects were arrested in Amsterdam and Valencia, Spain with the help of a lucky break involving the Nils Menara wiretap.
Despite all this, it appears that Menara's stint in prison hasn't deterred him from a life of crime and remains mum as to who he handed the artworks over to.

Erik P. talks about 'De Lange and that negro' they shot down who is in Suriname and about Errol ', as stated in the prosecution's requisitoir about the Schiphol robbery. Nils Menara asks all sorts of questions to Erik P. He then says: 'The Tall One has made a lot of loss on that case, you know, which is why he has become hesitant about it. In the sense that, he doesn't want to be linked to it himself, you know, that man has enough. It is still paranoia that one time that trap will close for him. ' Tall Hendrik is August B. He was seen as the mastermind behind the robbery but died a year after his arrest.

The monstrance, on loan to Museum Gouda since 1998 by the parish of St. Anthony of Padua is believed to be worth tens of thousands of euros and has never been recovered.

The culprit gets away on a motorcycle.

The Dutch police track Nils Menara and his accomplice through DNA traces on a crowbar and bolt cutters, which are said to have been used in IJsselstein theft.

and noting that Menar was previously convicted

is similar plus noting his previous conviction.

by Van Gogh and Frans Hals from museums in Laren and Leerdam. The Lelystad court also assigned € 8.739.516,54 in material damages.